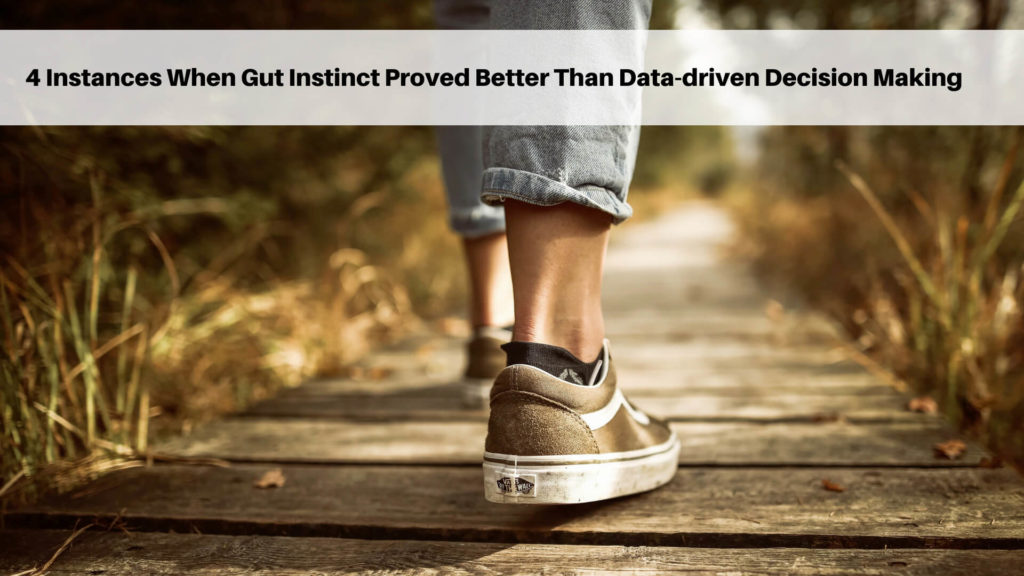 The popular retro song by Sting “Every breath you take, every move you make, I’ll be watching you” has become a reality for businesses and marketers who are monitoring customers and using that data to better their product or service. Big data analytics and IoT have further boosted this trend. Now, not only can marketers track digital moves of customers, but sensors are allowing them to track, collate and analyze activities as well. What happens to instinct then? Has it become completely obsolete? Are we going to leave all the decision-making to robots going forward?

Before you discount instinct completely, we’ve created a case for you so that you bring back instinct to the corporate table for important business decisions and growth strategies. Here’s a list of examples of how instinct has been the basis for some of the products and services we enjoy today:

Henry Ford was the first person to make automobiles accessible to the ordinary citizen by manufacturing them on a large scale and making it affordable to all. There’s a popular quote attributed to him – “If I had asked people what they wanted, they would’ve said faster horses”. His journey from an ordinary engineer to becoming the founder of the first commercial automobile company is completely driven by passion and an intrinsic belief in his work. If he had given up due to the various financial constraints or the multiple failures and the constant rejection from investors, we wouldn’t have the traffic problem that we face today. In fact, even though all the signs were asking him to stop or face severe financial loss, he still carried forward- relentlessly.

When Steve Jobs decided to launch the iPad he already had two other successful products; the MacBook and iPod, both had captured the market and were performing really well. In-depth research, customer surveys, and focus groups all pointed to the iPad being a failure. However, Steve Jobs didn’t pay heed to the data. He said “It’s really hard to design products by focus groups. A lot of times, people don’t know what they want until you show it to them.” He went ahead with his intuition, his previous learnings, and experience and launched the iPad against popular belief. And today iPad has created its own niche, becoming one of the noted products and top sellers from the Apple family.

Uber’s CEO Travis Kalanick came up with the idea of surge prices during peak hours to profit from the extra demand. He faced a backlash from several members of the management who believed that customers will start boycotting Uber due to this new addition. However, even today we all pay surge price without questioning or protesting, as Uber has been able to crack a vital market gap.

When Boeing launched in 1950, it had less than 1% of the commercial market share. Then Company President Bill Allen persuaded the team to build its first Jetliner. At that time, the two top players airline manufacturing giants Douglas and Lockheed, were busy competing to make the best propeller-driven airline. This gave Boeing and Bill Allen headway in commercial aircrafts. However, even after 5 years of struggle they were not able to get customers for the Boeing. It was at an event that the pilot took an instinctive decision to take the plane for a long circular flight when it caught the attention of the crowd. The incident led to the Boeing becoming one of the most commercially successful aircrafts of the 1960s and 70s.

These are just a few of the multitude of stories out there of businesses being born out of an instinctive decision, a thought in the shower, or an idea during a holiday and so on that have gone on to become established ventures.

Research has shown that intuition and instinct are the mind’s natural way of making decisions. While a person may not be able to decipher what gave way to that instinctive thought, it is usually the coming together of various past experiences, knowledge, and ideas that give rise to instinct. And maybe we should give instinct another chance, given that it has proven its mettle through the years up to now.